In this series, we’ll talk with our very own Workflow Pioneer Dave Ward on his long career in the world of workflow and the lessons he’s learned along the way as Workflow has ebbed and flowed, changing its name a few times but essentially always being there in one form or another to help organisations manage work better. We’ll start with a back story and finish with the detail on where IBM and I2V are at today and what the future holds. 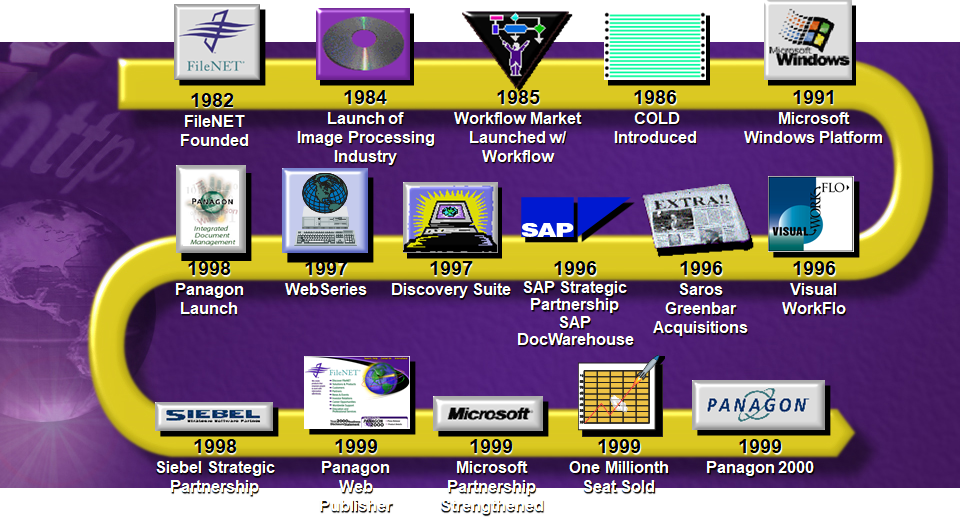 My first introduction to workflow was back in 1989 when I was working for BT Mobile. This was at a time when mobile phones cost thousands of pounds and people were expecting excellent customer service off the back of it. It was for this reason that BT Mobile went down the emerging technology route and purchased a state-of-the-art FileNet system.

I believe they were the third company in the UK to have such a system behind a Life Insurance Company and a Building Society (if you were around at the time I’m sure you still remember their names). If you wanted FileNet back then you had to buy the whole shooting match from the vendor – not just the software but servers, scanners, optical jukeboxes – the whole lot! This was in the days of MS-DOS with the OS only being able to access 640K of memory. There was no chance of displaying images with that sort of spec and you needed some fancy kit to get the job done. It cost an arm and a leg!

This early incarnation definitely wasn’t workflow as we know it now. It was more like a scripting language where you could move scanned documents and some associated metadata in and out of queues. With the introduction of MS Windows, the runtime environment switched from proprietary UNIX workstations to being PC based. This included a Forms package where the choice of background colours was completely different to those present in Windows – I reckon I must have spent more time trying to pick the closest colour to the customer’s Windows theme than developing the logic in the application itself!

Then Visual Workflo(w) came along, which was really the first workflow tool. FileNet even patented the word ‘WorkFlo’. 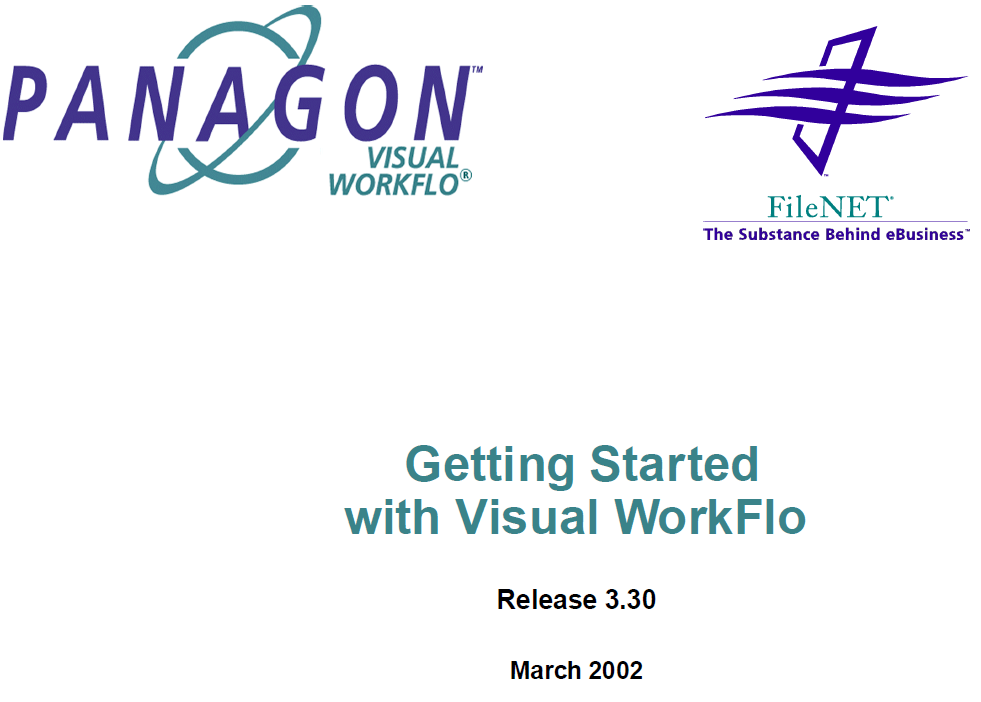 It was visionary for its time going from the old world of a basic queue based system to the new world of a proper workflow system: one which supported object-orientated technology with a fully-fledged process design environment that orchestrates steps rather than the steps being in code. 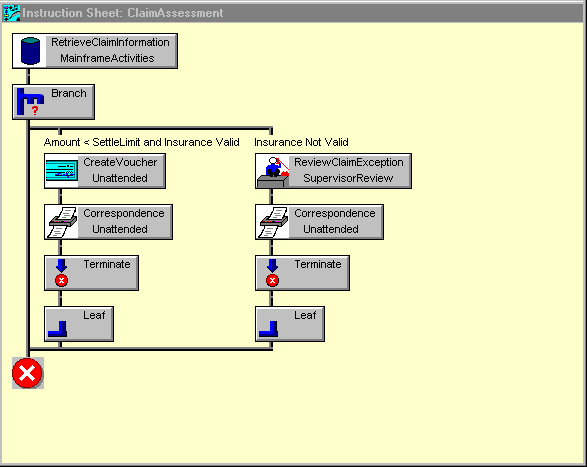 Visual WorkFlo then morphed into eProcess which was the first web-based interface. Up until then, you would need a runtime environment installed on your PC to provide access to the workflow steps in a world of Integrated Document Management (IDM). eProcess allowed users to participate in workflows from any device that ran a supported browser. We won’t mention that most of these processes were content-centric and so you still needed to download a massive “Viewer” EXE in order to see the associated document attachments!

Web-based enhancements continued to be the norm as thick-client offerings were put out to pasture. Things gathered pace in this technological shift and in 2002 FileNet emerged out of the codenamed Project “Brightspire” into the brave new world of ECM (Enterprise Content Management) with FileNet P8. 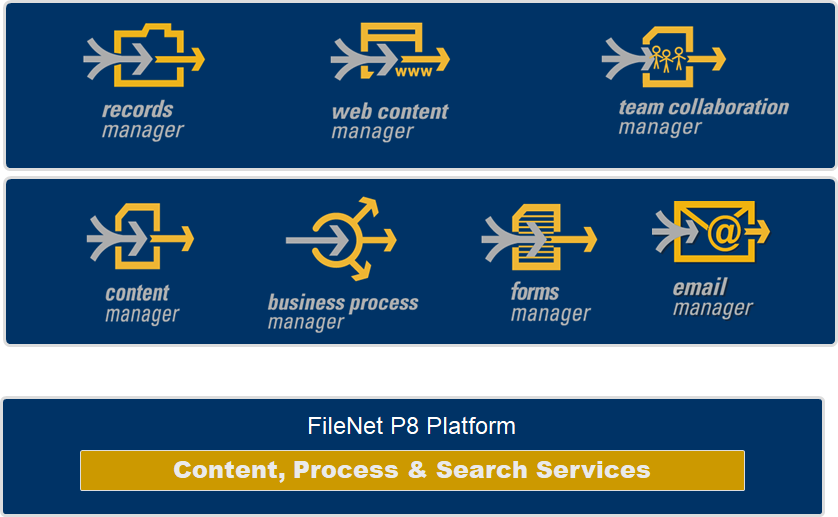 P8 contained Engines for Content, Process and the end-user Application. All of these components were architected from the ground up and the Content and Application Engines were radically different from previous incarnations. However, the Process Engine was still pretty much identical to its eProcess forebearer. I like to think this is a testament to how ground-breaking this software was back in the day, but others who used this software might have a different perspective as it was definitely an acquired taste!

FileNet Business Process Manager (BPM) turned into IBM Case Foundation (IBM acquired FileNet in 2006) and for the last 10 years or so has also been the workflow engine that sits underneath IBM Case Manager.

Previously, from the point of view of IBM partners, FileNet was regarded as having a good API and fantastic technology on the server side. However, the usability from an end-user perspective was pretty much non-existent. FileNet made a stab at doing something to remedy this, launching a product called Acenza which the FileNet Wikipedia page politely describes as ‘poorly received’. IBM Partners went off and made their own flavour of Case Management that sat on top of workflow and maybe added a database with configuration. It was their own IP that allowed people to build content and workflow applications on the FileNet stack. Having done a stint working as a technical consultant for IBM in the UK, I went on to work for a couple of those partners, including Oceanus, along with a number of people who are now at Insight 2 Value.

So, in 2010, IBM launched its own IBM Case Manager Platform to sit on top of the FileNet base components of Content and Workflow but also introduced other complimentary software from the IBM stable like ILOG (Rules) and Cognos RTM (BAM Dashboards).

Rather than the “build your own” approach which had been required for previous products, Case Manager was the first offering from IBM that looked like you could really do things with it out-of-the-box. It had a design environment where you could define all elements of the solution which was prototypical in its approach to rapid application development. You could start to build the properties/roles/workflows/screens / etc. then “crank the handle” and you immediately had something that you could show people as the result of this prototyping. You didn’t necessarily have to go away and write requirements documents for nine months – and if it wasn’t in that document, you couldn’t deliver it. It was refreshing and a real shift that allowed a more agile approach.

We still had the odd moment of drama with the IBM machine though. Case Manager used widgets and wiring as part of the UI framework and back in the early days, we seemed to switch brands from WebSphere Business Space to Lotus Mashup Center and back again every 12 months!

One of the first projects I did was for a Pensions Administrator. I literally went on site, sat in an office and built a solution. The customer had invested heavily in BPM but wasn’t particularly enamoured with what their workflow technology gave them. They were interested in where they could take things with Case Manager. In short timescales, three months I think, we went live with what was probably the first production customer in Europe, certainly the first in the UK.

Insight 2 Value was right up there pushing the boundaries with direct access to the IBM folks in the USA. We were coming up against real showstoppers at times and the support we received from IBM in those early days was pretty outstanding.

We managed to implement a solution for 150+ types of work across member and scheme related processes in 3 months from commencement to live production.

This ranged from simple stuff such as ‘I want to change my name or my marital status’, right through to ‘I’m thinking about retiring early, could you give me an illustration of what my pension’s going to look like if I do that next year’. We also managed to provide integration into their line of business systems as well. We had URLs configured for each process at the Maker / Checker / Authorise steps and so we were able to drive the Pensions Admin system to the correct screen for that Member or Scheme depending upon which type of process had been initiated and the role each user played within that process.

Battle of the products

In 2010 IBM bought Lombardi, whose product was another business process management suite and was re-branded as IBM BPM. Effectively, IBM BPM and IBM FileNet BPM were now competing against each other in the same marketplace. It was a strange situation. We were told that for a while, IBM was actually losing business because competitors were saying IBM don’t know what to do in terms of its strategy for full workflow. The feeling from the market was that IBM should just pick one of the products. IBM came out and positioned FileNet BPM as the Case Management product and that’s what you need for content-centric workflows. Conversely, Lombardi/IBM BPM is all about straight-through-processing. I’m not sure I bought the idea that the products were very different but I suppose they needed to do something to stop the market confusion. I remember visiting a customer in Ireland with IBM who had already invested heavily in IBM BPM and we got absolutely pasted from pillar to post trying to sell these demarcation lines. The customer was saying ‘We’ve got all this straight-through workflow processing and now you’re telling us we now need to buy all the FileNet infrastructure and learn another product! We’ve already got a massive centre of excellence here.’ Not good.

Around that time, we started talking more with the IBM BPM people about the ‘Basic Case’ feature they had. Again this was another example of the confusion within IBM at that time and the conflict that often occurred across different “brands”. Instead of recommending the case-centric workflow engine and losing the revenue to another part of IBM it was decided it was best to develop a new product to compete in the same space! This provided me with an opportunity to look more closely at IBM BPM and I must admit it contained many features that had never been present in the FileNet BPM product. Call it heresy, but I could definitely see the benefit of using IBM BPM, even if it meant going against my “FileNet” heritage.

Meanwhile, we were managing to pick up more Case Management customers, the latest of which was a large Japanese bank. This was another case (excuse the pun) of a customer transitioning from traditional old school FileNet BPM up into IBM Case Manager. Based upon these successes Phil Hagen and I went over to the IBM Insight 2014 conference in Vegas to represent Insight 2 Value. We did a presentation entitled ‘Using IBM Case Manager to Deliver Early Benefits & Drive Continuous Improvement’ and we included a demonstration based upon a prototype we’d put together for a motor insurance company. We showed what IBM Case Manager looked like out of the box and then showcased the work Insight 2 Value had done to extend it using our own widgets. We talked about the need to change mindsets from trying to develop a perfect solution (months/years to implement, often monolithic and inflexible) to implementing a solution that ticks the main boxes quickly, and which can then be incrementally improved. I have to say it was a great experience which seemed to be well received by IBMers and customers alike.

Back in the IBM BPM world

As time went on, Basic Case never really seemed to go anywhere. I think it had a couple of minor version releases but it never really got majored as a feature in IBM BPM. The two camps remained siloed until the “war of the workflows” could find a victor, which I guess fits in with Business Automation Workflow (BAW) adoption and the likely crossover (which I’ll talk about in my next blog).

Meanwhile, we ploughed on successfully implementing Case Management solutions in the flavour that we still have now to various companies across the UK and Ireland. We’ve learned along the way a particular methodology by which to approach our projects and we developed specific IP and domain expertise across many verticals as we went.

So, that draws me to the end of part one. It was a bit of a meandering history. In the next blog, I’ll be talking about BAW Business Automation workflow and then I’ll move on to CloudPak and the future of Workflow for the final one.

Do you want to review your workflows?
Book a meeting